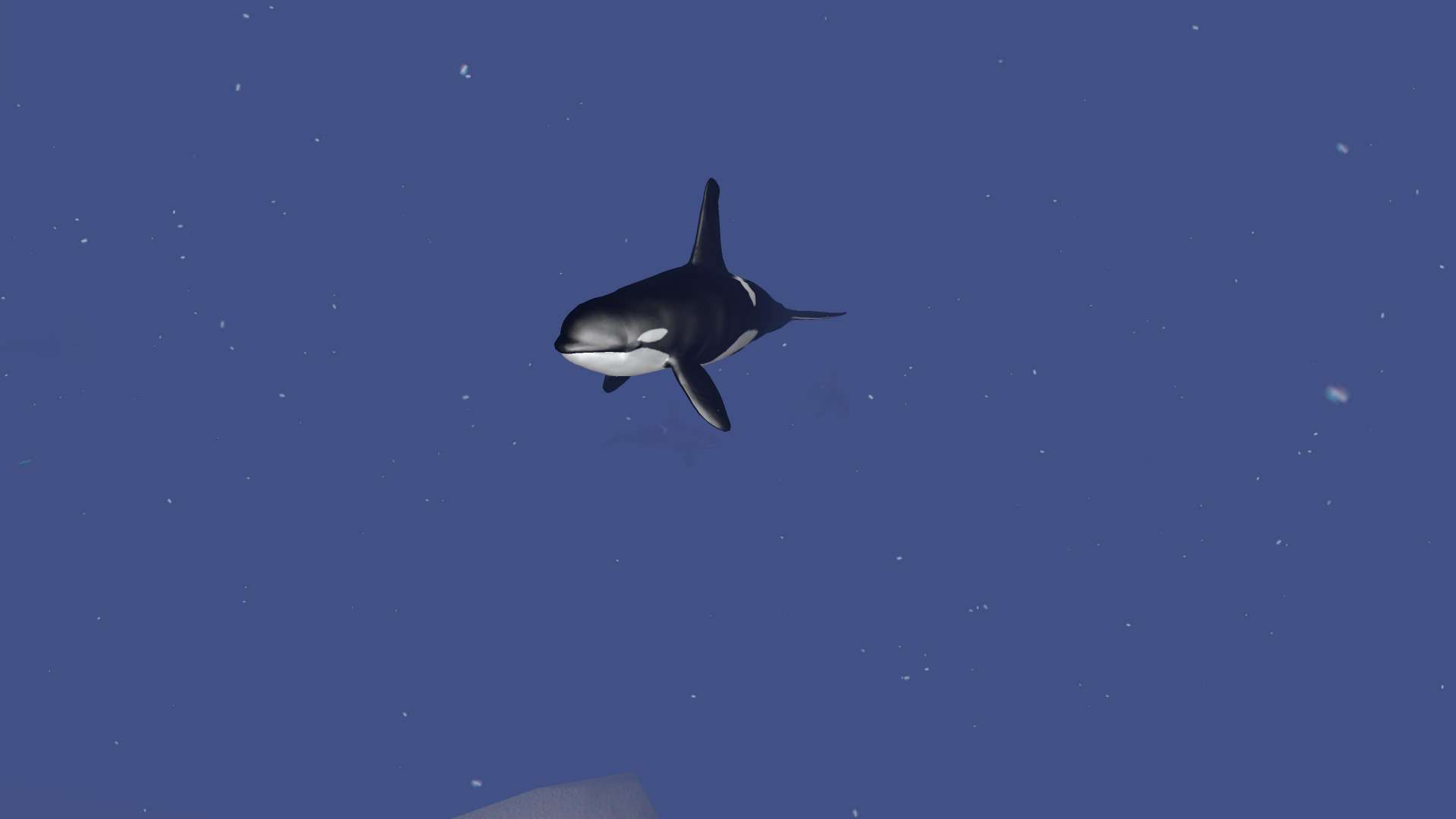 The polar cold is felt even in the water, with a fauna mainly consisting of cetaceans, this icy environment offers you various songs of marine mammals, but not only. Pay attention at the differents depths. 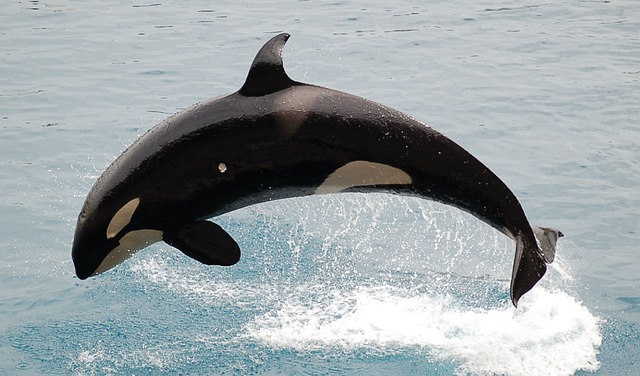 The killer whale or orca (Orcinus orca) is a toothed whale belonging to the oceanic dolphin family, of which it is the largest member. Killer whales have a diverse diet, although individual populations often specialize in particular types of prey. Some feed exclusively on fish, while others hunt marine mammals such as seals and dolphins. They have been known to attack baleen whale calves, and even adult whales. Killer whales are apex predators, as no animal preys on them. A cosmopolitan species, they can be found in each of the world's oceans in a variety of marine environments, from Arctic and Antarctic regions to tropical seas, absent only from the Baltic and Black seas, and some areas of the Arctic Ocean.
Killer whales are highly social; some populations are composed of matrilineal family groups (pods) which are the most stable of any animal species. Their sophisticated hunting techniques and vocal behaviours, which are often specific to a particular group and passed across generations, have been described as manifestations of animal culture.
The International Union for Conservation of Nature assesses the orca's conservation status as data deficient because of the likelihood that two or more killer whale types are separate species. Some local populations are considered threatened or endangered due to prey depletion, habitat loss, pollution (by PCBs), capture for marine mammal parks, and conflicts with human fisheries. In late 2005, the southern resident killer whales, which swim in British Columbia and Washington state waters, were placed on the U.S. Endangered Species list.
Wild killer whales are not considered a threat to humans,[6] but there have been cases of captive orcas killing or injuring their handlers at marine theme parks. Killer whales feature strongly in the mythologies of indigenous cultures, with their reputation ranging from being the souls of humans to merciless killers.
Wikipedia 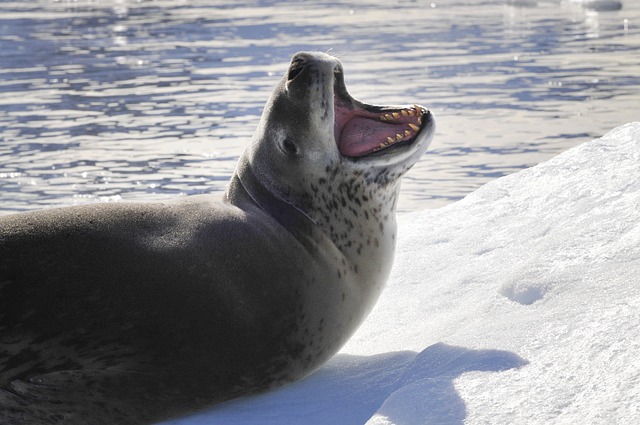 The leopard seal (Hydrurga leptonyx), also referred to as the sea leopard, is the second largest species of seal in the Antarctic (after the southern elephant seal). It is second only to the killer whale among Antarctica's top predators, feeding on a wide range of prey including cephalopods, pinnipeds, birds and fish. It is the only species in the genus Hydrurga. Its closest relatives are the Ross seal, the crabeater seal and the Weddell seal, which together are known as the tribe of lobodontini seals. The name hydrurga means "water worker" and leptonyx is the Greek for "small clawed".
Wikipedia 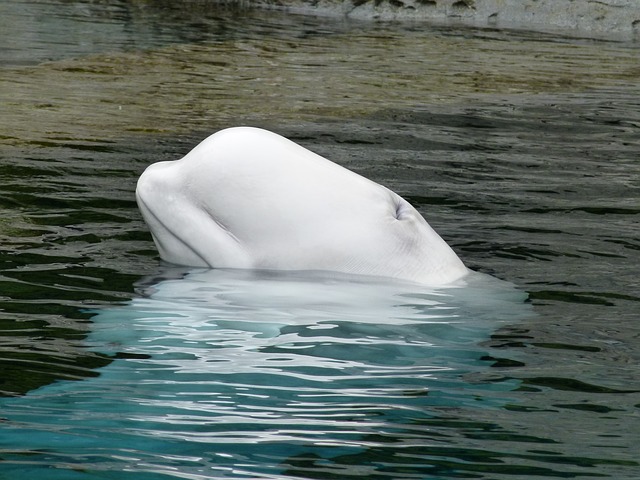 The beluga whale or white whale (Delphinapterus leucas) is an Arctic and sub-Arctic cetacean. It is 1 of 2 members of the family Monodontidae, along with the narwhal, and the only member of the genus Delphinapterus. This marine mammal is commonly referred to as the beluga, melonhead, sea canary, or canary whale due to its high-pitched twitter.
It is adapted to life in the Arctic, so has anatomical and physiological characteristics that differentiate it from other cetaceans. Amongst these are its all-white color and the absence of a dorsal fin. It possesses a distinctive protuberance at the front of its head which houses an echolocation organ called the melon, which in this species is large and deformable. The beluga's body size is between that of a dolphin's and a true whale's, with males growing up to 5.5 m (18 ft) long and weighing up to 1,600 kg (3,530 lb). This whale has a stocky body. A large percentage of its weight is blubber, as is true of many cetaceans. Its sense of hearing is highly developed and its echolocation allows it to move about and find blowholes under sheet ice.
Belugas are gregarious and form groups of up to 10 animals on average, although during the summer, they can gather in the hundreds or even thousands in estuaries and shallow coastal areas. They are slow swimmers, but can dive to 700 m (2,300 ft) below the surface. They are opportunistic feeders and their diets vary according to their locations and the season. The majority of belugas live in the Arctic Ocean and the seas and coasts around North America, Russia and Greenland; their worldwide population is thought to number around 150,000. They are migratory and the majority of groups spend the winter around the Arctic ice cap; when the sea ice melts in summer, they move to warmer river estuaries and coastal areas. Some populations are sedentary and do not migrate over great distances during the year.
The native peoples of North America and Russia have hunted belugas for many centuries. They were also hunted commercially during the 19th century and part of the 20th century. Whale hunting has been under international control since 1973. Currently, only certain Inuit and Alaska Native groups are allowed to carry out subsistence hunting of belugas. Other threats include natural predators (polar bears and killer whales), contamination of rivers (as with PCBs which bioaccumulate up the food chain), and infectious diseases. From a conservation perspective, the beluga was placed on the International Union for Conservation of Nature's Red List in 2008 as being "near threatened"; the subpopulation from the Cook Inlet in Alaska, however, is considered critically endangered and is under the protection of the United States' Endangered Species Act. Of seven Canadian beluga populations, the 2 inhabiting eastern Hudson Bay and Ungava Bay are listed as endangered.
Belugas are one of the most commonly kept cetaceans in captivity and are housed in aquariums, dolphinariums, and wildlife parks in North America, Europe, and Asia. They are popular with the public due to their colour and expression.
Wikipedia 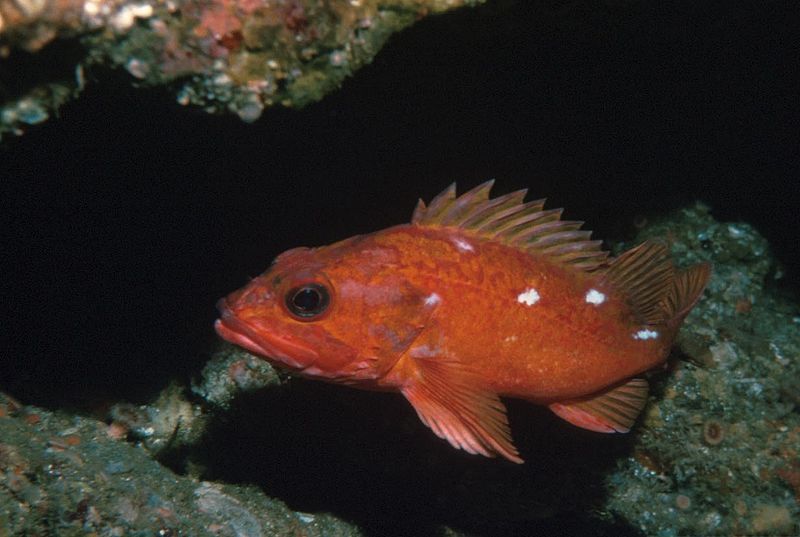 Sebastes is a genus of fish in the family Sebastidae (though some include this in Scorpaenidae), most of which have the common name of rockfish. A few are called ocean perch, sea perch or redfish instead. Most of the Sebastes species live in the north Pacific, although two (Sebastes capensis and Sebastes oculatus) live in the south Pacific/Atlantic and four (Sebastes fasciatus, Sebastes mentella, Sebastes norvegicus and Sebastes viviparus) live in the north Atlantic. The coast off South California is the area of highest rockfish diversity, with 56 species living in the Southern California Bight.
The fossil record of rockfish goes back to the Miocene, from California and Japan (although fossil otoliths from Belgium, "Sebastes" weileri, may push the record back as far as the Oligocene). Rockfish are an important sport and commercial fish, and many species have been overfished. As a result, seasons are tightly controlled in many areas. Sebastes are sometimes fraudulently substituted for the more expensive northern red snapper (Lutjanus campechanus).
Wikipedia 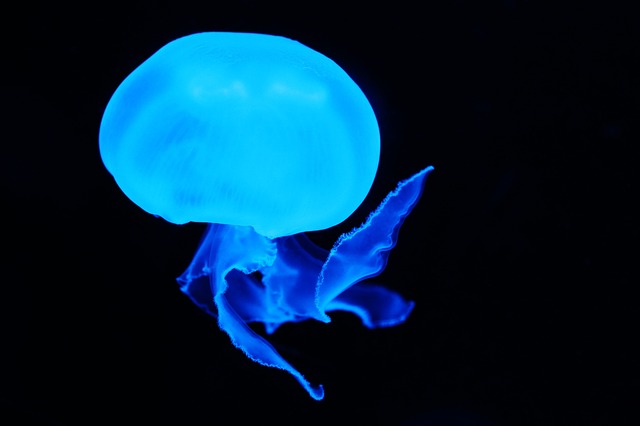 Jellyfish, jellies or sea jellies are the informal common names given to the medusa-phase of certain gelatinous members of the subphylum Medusozoa, a major part of the phylum Cnidaria. Jellyfish are mainly free-swimming marine animals with umbrella-shaped bells and trailing tentacles, although a few are not mobile, being anchored to the seabed by stalks. The bell can pulsate to provide propulsion and highly efficient locomotion. The tentacles are armed with stinging cells and may be used to capture prey and defend against predators. Jellyfish have a complex life cycle; the medusa is normally the sexual phase, the planula larva can disperse widely and is followed by a sedentary polyp phase.
Jellyfish are found all over the world, from surface waters to the deep sea. Scyphozoans (the "true jellyfish") are exclusively marine, but some hydrozoans with a similar appearance live in freshwater. Large, often colorful, jellyfish are common in coastal zones worldwide. The medusae of most species are fast growing, mature within a few months and die soon after breeding, but the polyp stage, attached to the seabed, may be much more long-lived. Jellyfish have roamed the seas for at least 500 million years, and possibly 700 million years or more, making them the oldest multi-organ animal group.
Jellyfish are eaten by humans in certain cultures, being considered a delicacy in some Asian countries, where species in the Rhizostomae are pressed and salted to remove excess water. They are also used in research, where the green fluorescent protein, used by some species to cause bioluminescence, has been adapted as a fluorescent marker for genes inserted into other cells or organisms. The stinging cells used by jellyfish to subdue their prey can also injure humans. Many thousands of swimmers are stung every year, with effects ranging from mild discomfort to serious injury or even death; small box jellyfish are responsible for many of these deaths. When conditions are favourable, jellyfish can form vast swarms. These can be responsible for damage to fishing gear by filling fishing nets, and sometimes clog the cooling systems of power and desalination plants which draw their water from the sea.
Wikipedia 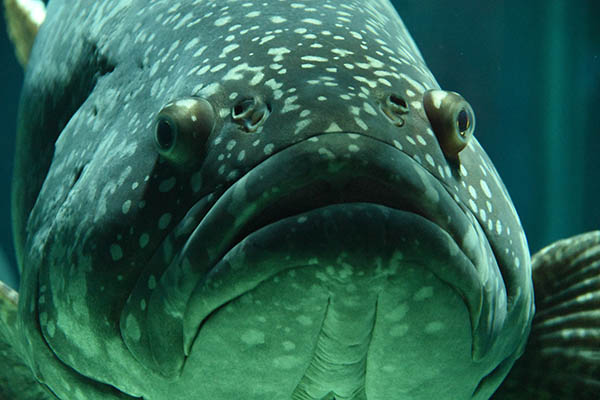 Giant sea bass reaching a size of 2.5 m (8.2 ft) and a weight of up to 255 kg (562 lbs) have been reported. However, in Charles F. Holder's book The Channel Islands of California, published in 1910, the author claims specimens taken from the Gulf of California attained 800 lb (360 kg). Aside from its tremendous size, the giant sea bass is also known for its lengthy lifespan. They mature around the age of 11 or 12, around the weight of 50 lb. However, some of the largest specimens have been known to exceed 7 ft, and are estimated to be 75 years or older.
In the eastern North Pacific, its range is from Humboldt Bay, California, to the Gulf of California, Mexico, most common from Point Conception southward. It usually stays in relatively shallow water, near kelp forests, drop-offs, or rocky bottoms and sand or mudflats.
Wikipedia