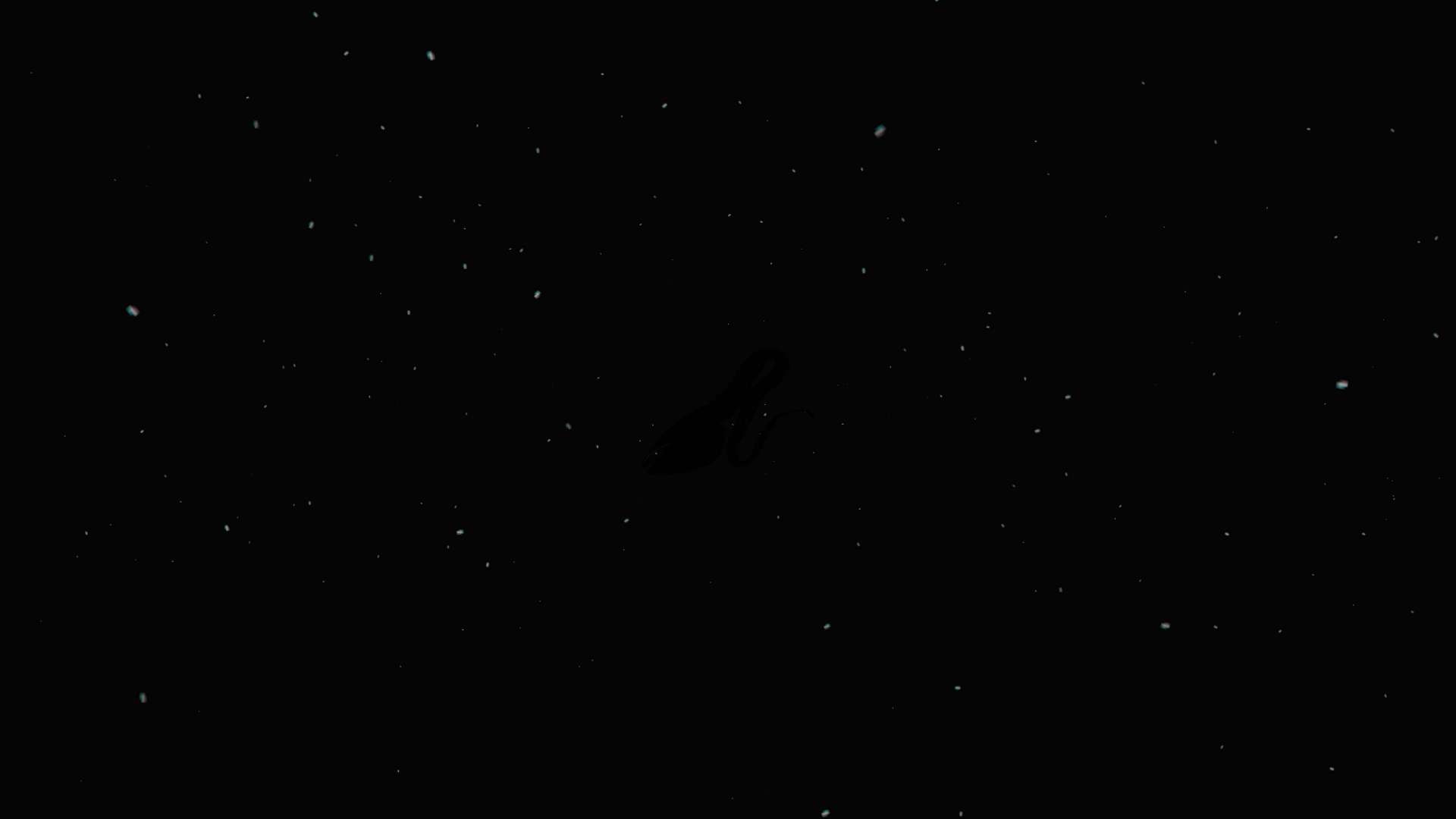 The deep sea, the end of the known world. The abyss has aroused the curiosity of many explorers. Their huge sizes, the total darkness, animal species with unique shapes. Discover here an environment a bit scary, the absolute black, very few animals distributed in a big surface. This is the most delicate environment of the application that may not be there in future updates due to the complexity of navigation it creates. Indeed, we wanted you to feel the realism of the great depths, where it is particularly difficult to find life. For information, the scales of the visible fish are respected but each species has been sized of the largest known size, to make their observation easier. 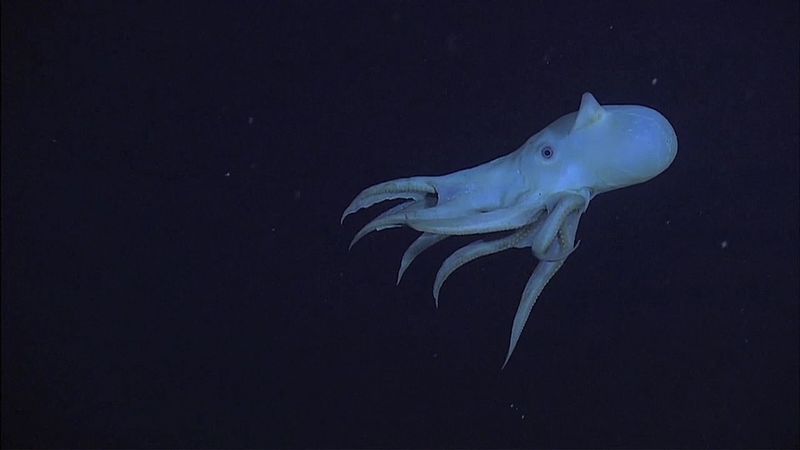 Grimpoteuthis is a genus of pelagic umbrella octopuses known as the dumbo octopuses. The name "dumbo" originates from their resemblance to the title character of Disney's 1941 film Dumbo, having a prominent ear-like fin which extends from the mantle above each eye. There are 13 species recognized in the genus.[2] Prey include crustaceans, bivalves, worms and copepods. The average life span of various Grimpoteuthis species is 3 to 5 years.
Most species of Grimpoteuthis live at depths of at least 3,000 to 4,000 metres (9,800 to 13,100 ft) with some living up to 7,000 metres (23,000 ft) below sea level, which is the deepest of any known octopus.[3] They are some of the rarest of the Octopoda species though they occur worldwide including in the waters of New Zealand, Australia, Monterey Bay, Oregon, Philippines, Martha's Vineyard, Papua New Guinea and Azores. The largest dumbo octopus ever recorded was 1.8 metres (5.9 ft) in length and weighed 5.9 kilograms (13 lb).[4] The average size for most species is 20–30 centimetres (7.9–12 in) in length. The average weight is still undetermined. Wikipedia Link 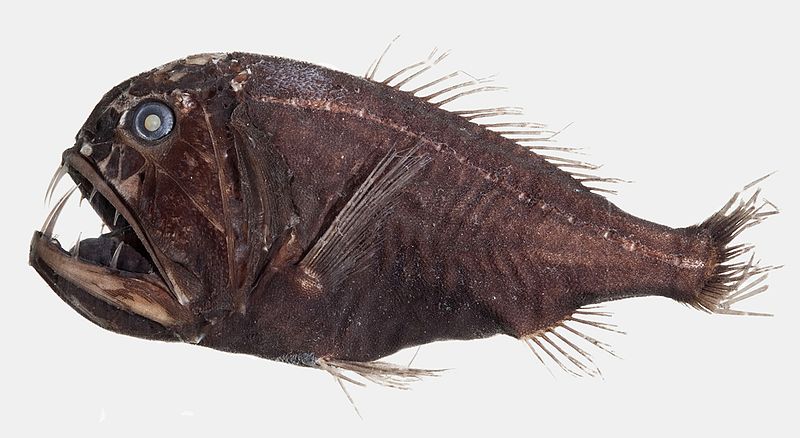 Fangtooths are beryciform fish of the family Anoplogastridae (sometimes spelled "Anoplogasteridae") that live in the deep sea. The name is from Greek anoplo meaning "unarmed" and gaster meaning "stomach". With a circumglobal distribution in tropical and cold-temperate waters, the family contains only two very similar species in one genus, with no known close relatives.
Link Wikipedia

The gulper eel (Eurypharynx pelecanoides) is a deep-sea fish rarely seen by humans, though it is occasionally caught in fishing nets. It is an eel-like fish and the only known member of the genus Eurypharynx and the family Eurypharyngidae. It belongs to the order Saccopharyngiformes, which is closely related to the true eels in Anguilliformes. It is also referred to as the pelican eel, pelican gulper, and umbrella-mouth gulper.[1] The specific epithet pelecanoides refers to the pelican, as the fish's large mouth is reminiscent of that of the bird.
Wikipedia 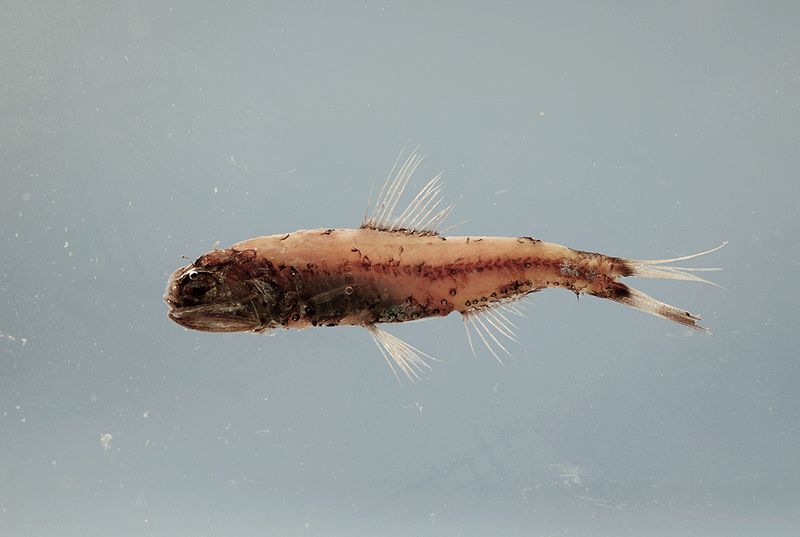 Lanternfishes (or myctophids, from the Greek μυκτήρ myktḗr, "nose" and ophis, "serpent") are small mesopelagic fish of the large family Myctophidae. One of two families in the order Myctophiformes, the Myctophidae are represented by 246 species in 33 genera, and are found in oceans worldwide. They are aptly named after their conspicuous use of bioluminescence. Their sister family, the Neoscopelidae, are much fewer in number but superficially very similar; at least one neoscopelid shares the common name 'lanternfish': the large-scaled lantern fish, Neoscopelus macrolepidotus.
Sampling via deep trawling indicates lanternfish account for as much as 65% of all deep-sea fish biomass.[2] Indeed, lanternfish are among the most widely distributed, populous, and diverse of all vertebrates, playing an important ecological role as prey for larger organisms. With an estimated global biomass of 550–660 million metric tonnes, several times the entire world fisheries catch, lanternfish also account for much of the biomass responsible for the deep scattering layer of the world's oceans. In the Southern Ocean, myctophids provide an alternative food resource to krill for predators such as squid and the king penguin. Although plentiful and prolific, currently only a few commercial lanternfish fisheries exist: limited operations off South Africa, in the sub-Antarctic, and in the Gulf of Oman.
Wikipedia

The stoplight loosejaws are small, deep-sea dragonfishes of the genus Malacosteus, classified either within the subfamily Malacosteinae of the family Stomiidae, or in the separate family Malacosteidae. They are found worldwide, outside of the Arctic and Subantarctic, in the mesopelagic zone below a depth of 500 meters (1,600 feet). This genus once contained three nominal species: M. niger (the type), M. choristodactylus, and M. danae, with the validity of the latter two species being challenged by different authors at various times. In 2007, Kenaley examined over 450 stoplight loosejaw specimens and revised the genus to contain two species, M. niger and the new M. australis.
Malacosteus and the related genera Aristostomias and Pachystomias are the only fishes that produce red bioluminescence. As most of their prey organisms are not capable of perceiving light at those wavelengths, this allows Malacosteus to hunt with an essentially invisible beam of light. Furthermore, Malacosteus is unique amongst animals in using a chlorophyll derivative to perceive red light. The name Malacosteus is derived from the Greek malakos meaning "soft" and osteon meaning "bone". Another common name for these fishes is "rat-trap fish", from the unusual open structure of their jaws.
Wikipedia 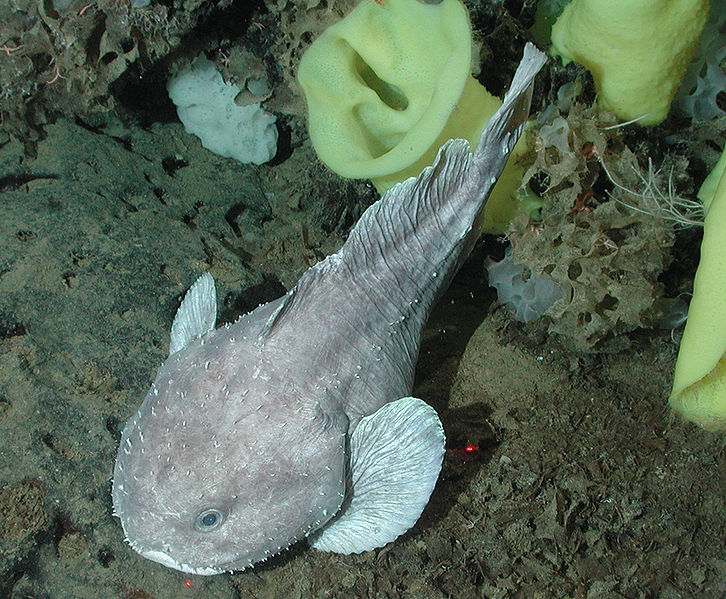 The blobfish (Psychrolutes marcidus) is a deep sea fish of the family Psychrolutidae. It inhabits the deep waters off the coasts of mainland Australia and Tasmania, as well as the waters of New Zealand.
Blobfish are typically shorter than 30 cm (12 in). They live at depths between 600 and 1,200 m (2,000 and 3,900 ft) where the pressure is 60 to 120 times as great as at sea level, which would likely make gas bladders inefficient for maintaining buoyancy. Instead, the flesh of the blobfish is primarily a gelatinous mass with a density slightly less than water; this allows the fish to float above the sea floor without expending energy on swimming. Its relative lack of muscle is not a disadvantage as it primarily swallows edible matter that floats in front of it such as deep-ocean crustaceans.
Blobfish are often caught as bycatch in bottom trawling nets. The popular impression of the blobfish as bulbous and gelatinous is partially an artifact of the decompression damage done to specimens when they are brought to the surface from the extreme depths in which they live.[3] In their natural environment, blobfish appear more typical of their superclass Osteichthyes (bony fish).
Wikipedia