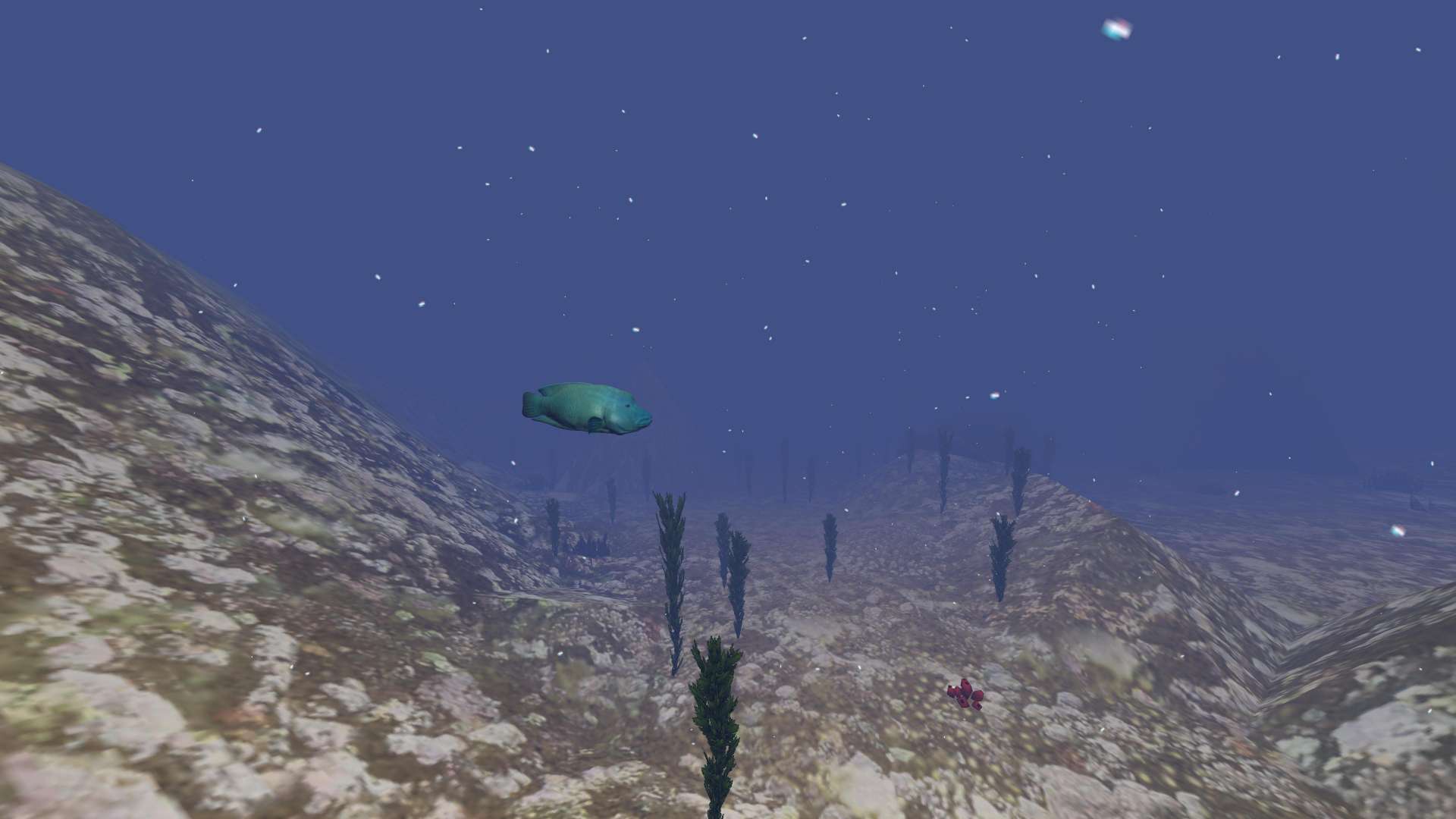 The largest environment of Sea Life Relax, gathering the biggest amount of species, in large quantities. Even if some are well hidden. Here we put species from the Indian Ocean and the Pacific but also from hot seas such as the Caribbean. The reason for this grouping is to offer a very rich environment in life, with very variable sizes, from the smallest fish to the largest sperm whale. It is “brother” environment of the Atlantic, a fairly similar design, there are unique species. If abundance is in order, be careful not to be surprised. Indeed, some predators are present in the Atlantic but also in the Pacific. 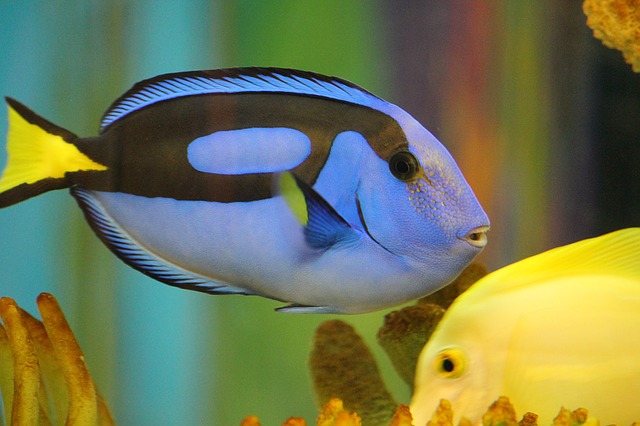 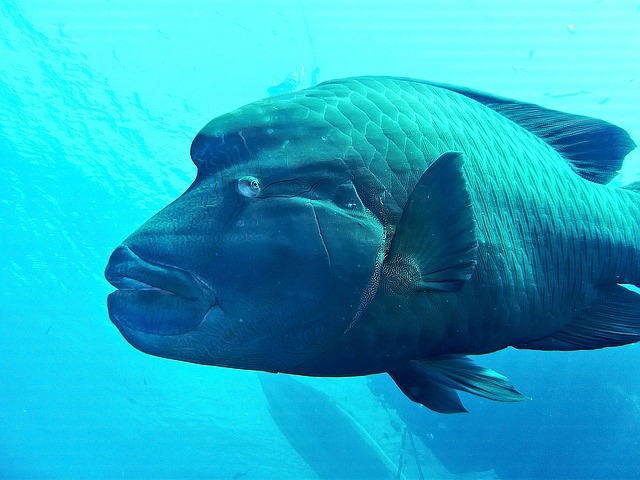 The humphead wrasse (Cheilinus undulatus) is a species of wrasse mainly found on coral reefs in the Indo-Pacific region. It is also known as the Māori wrasse, Napoleon wrasse, Napoleon fish, Napoleonfish, so mei 蘇眉 (Cantonese), mameng (Filipino), and merer in the Pohnpeian language of the Caroline Islands.
Wikipedia 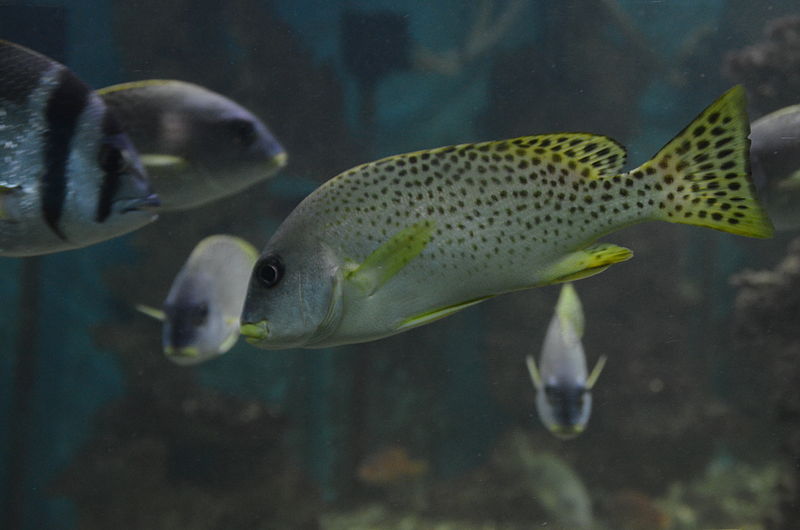 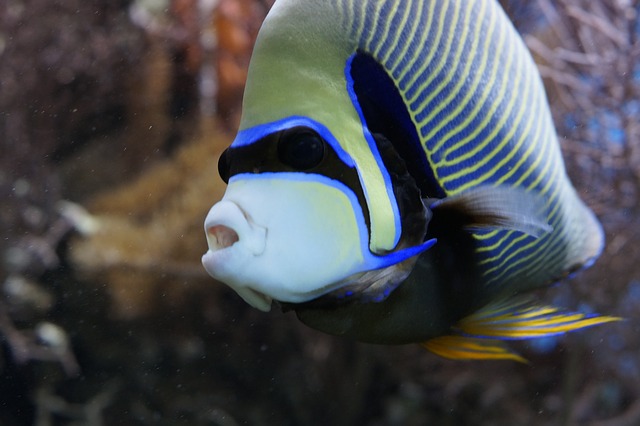 The emperor angelfish (Pomacanthus imperator) is a species of marine angelfish. It is a reef-associated fish, native to the Indian and Pacific Oceans, from the Red Sea to Hawaii and the Austral Islands. This species is generally associated with stable populations and faces no major threats of extinction. It is a favorite of photographers, artists, and aquarists because of its unique, brilliant pattern of coloration.
Wikipedia 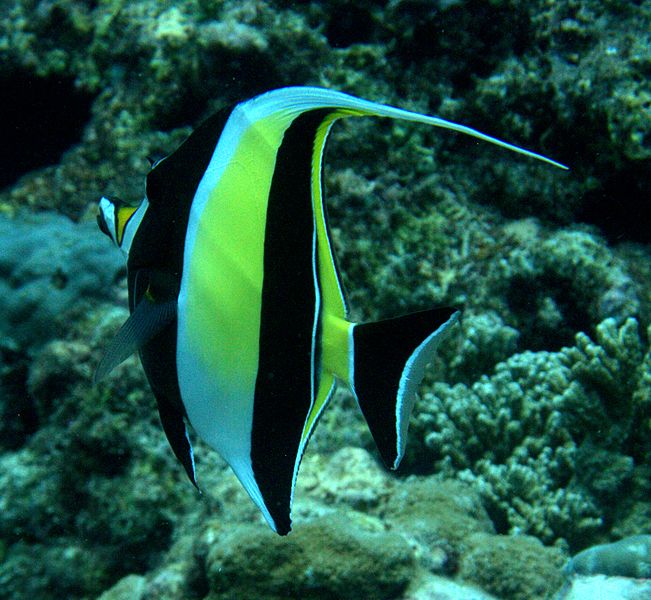 The Moorish idol (Zanclus cornutus), is a marine fish species, the sole extant representative of the family Zanclidae (from the Greek ζαγκίος, zagkios, "oblique") in order Perciformes. A common inhabitant of tropical to subtropical reefs and lagoons, the Moorish idol is notable for its wide distribution throughout the Indo-Pacific. A number of butterflyfishes (genus Heniochus) closely resemble the Moorish idol. It is closely related to, if not a direct descendant of, the extinct Eozanclus brevirostris, from the Middle Eocene of Monte Bolca.
The Moorish idol got its name from the Moors of Africa, who purportedly believed the fish to be a bringer of happiness. Moorish idols are also a coveted aquarium fish but, despite their abundance and wide array of habitats, they are notoriously finicky and hard to adjust to captivity. Their omnivorous diet can be extremely difficult to replicate in aquaria, as the vegetation which they live on is normally exterminated and they have a habit of eating corals and sponges.
Wikipedia 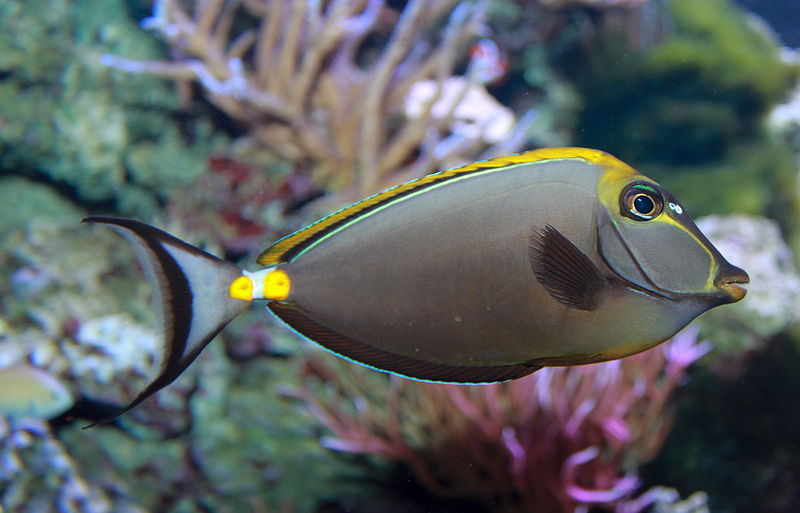 Naso lituratus is a species of fish in the family Acanthuridae, the tangs and unicornfishes. Its common names include barcheek unicornfish, naso tang, and orange-spine unicornfish.
This species can be found in the Indian Ocean and the Pacific Ocean. This species can be easily recognised by two bright orange forward-hooked spines on the caudal peduncle (the tail base), its orange lips and black face mask. The body is brownish-grey with yellow nape and there is a broad black band on the dorsal fin. It reaches about 45 cm in length. It can be found on coral reefs, often in pairs.
Lien Wikipédia 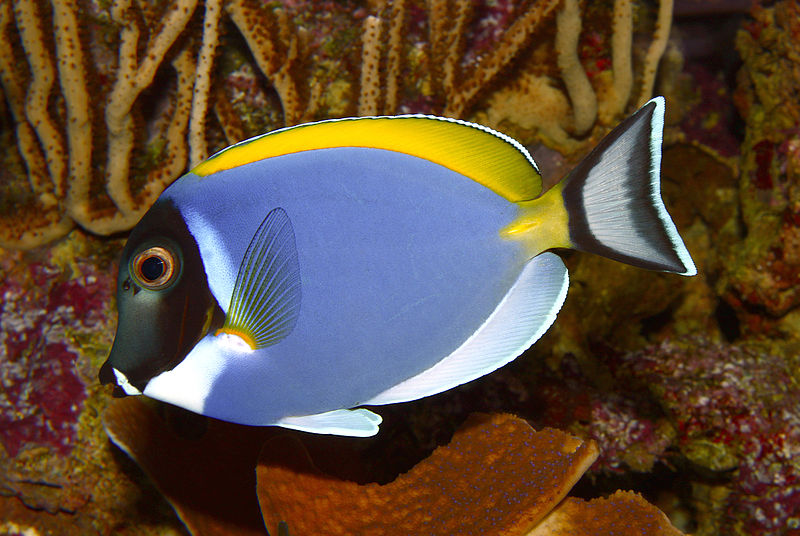 The fish can reach an average size of 23 cm (9 in) in length. The body has an oval shape and is compressed laterally. Like other surgeonfishes, Acanthurus leucosternon swims with its pectoral fins. The caudal fin has a crescent shape. The fish has a "surgeon's scalpel," an erected part of the spine located at the base of the tail. The mouth is small and pointed in a beak-like manner with tiny and sharp teeth for reaching narrow spaces of food. Its sides are blue; its dorsal fin and the base of caudal fin are yellow; the head is black; the mouth, the throat area, the anal and pelvic fins are white. The pectoral fins are transparent with yellow reflections. The intensity of its blue color shows off if the fish is healthy or not. The fish does not undergo color changes as it matures; as some tangs, surgeonfish and unicornfish do.
Wikipedia 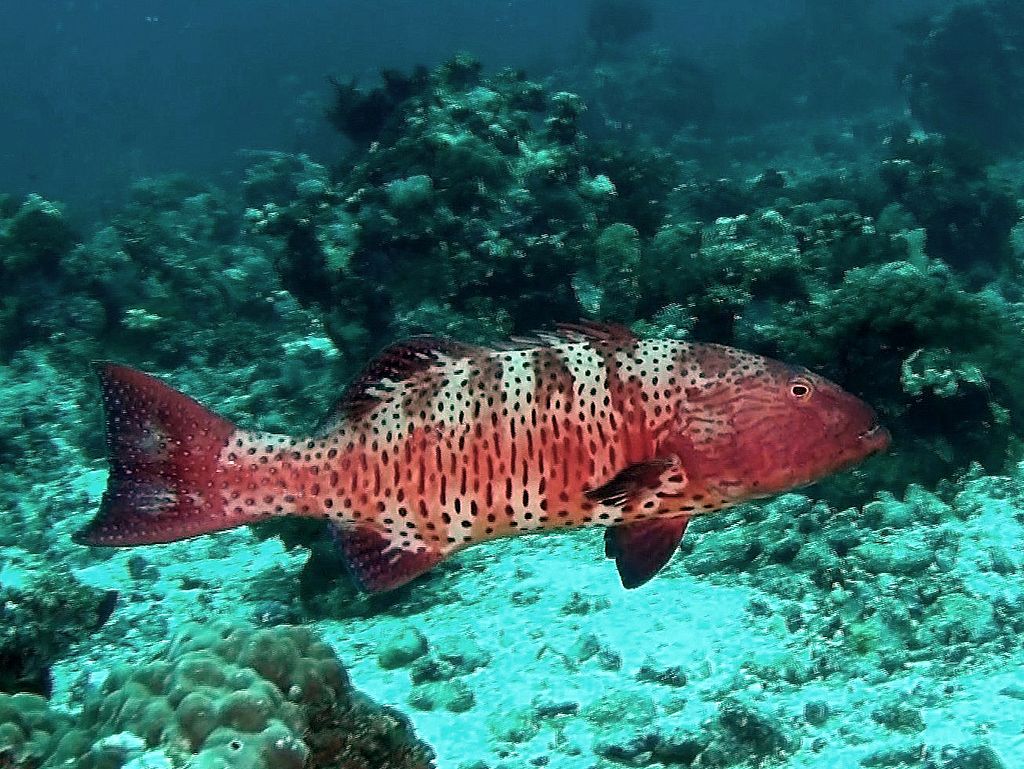 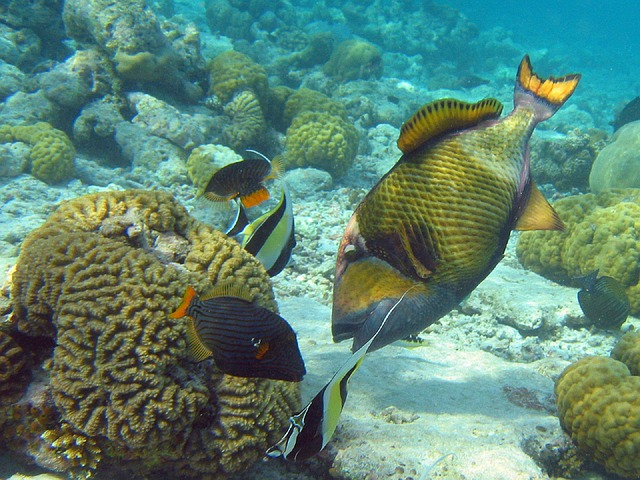 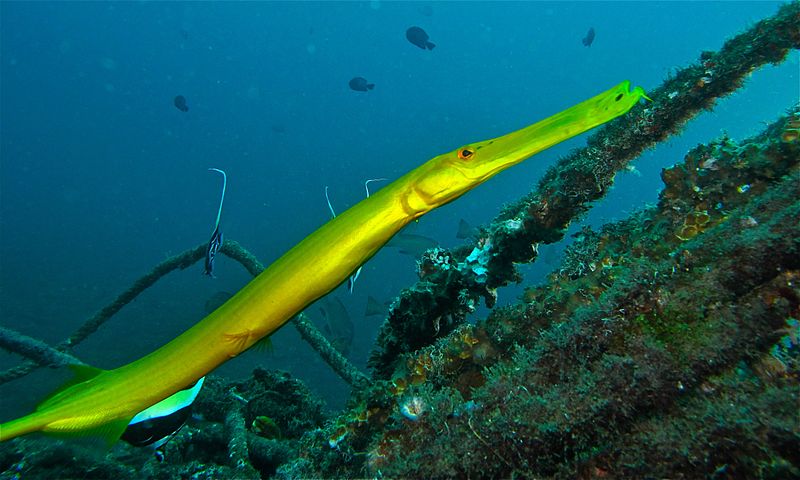 The trumpetfishes are three species of highly specialized, tubular-elongated marine fishes in the genus Aulostomus, of the monogeneric family Aulostomidae. The trumpetfishes are members of the order Syngnathiformes, together with the seahorses and the similarly built, closely related cornetfishes.
The generic name, Aulostomus, is a composite of two Greek words: aulos, meaning flute, and stoma, meaning mouth, because the species appear to have tubular snouts. "Flutemouth" is another less-common name for the members of the family (although this word is more often used to refer to closely related cornetfishes of the family Fistulariidae).
Trumpetfishes are found in tropical waters worldwide, with two species in the Atlantic and one in the Indo-Pacific. They are mostly demersal reef-dwellers, where one species seems to prefer rocky substrate.
They are relatively large for reef fish, where they reach almost 1 m in length. Bodies of trumpetfish are elongated, rigid, and pike-shaped. Their dorsal and anal fins are almost closely adjacent to the tail, where individual dorsal spines reach midway towards the head region. Similar to most members of the order Syngnathiformes, the bodies of trumpetfish are inflexible, supported by interwoven struts of bone. A distinct trait of the family is their long, tubular snouts ending with somewhat nondescript jaws. Members of the family have the capability to expand their jaws quickly into a circular, gaping hole almost to the body's diameter when feeding.
Aulostomids are highly carnivorous fish. They stalk their prey by hovering almost motionlessly a few inches above the substrate, inching their way towards unsuspecting prey. Once close enough, they rapidly dart in and expand their jaws rapidly. Opening their tube-like mouths in quick succession creates a strong suction force, which draws prey straight into the mouth. Aulostomids are known to feed almost exclusively on small, schooling reef fishes.
While they have no commercial fisheries value, members of the family have been known to occasionally be found in the aquarium trade. Not popular aquarium fish, they are common enough with websites having instructions in keeping them in captivity.
Wikipedia 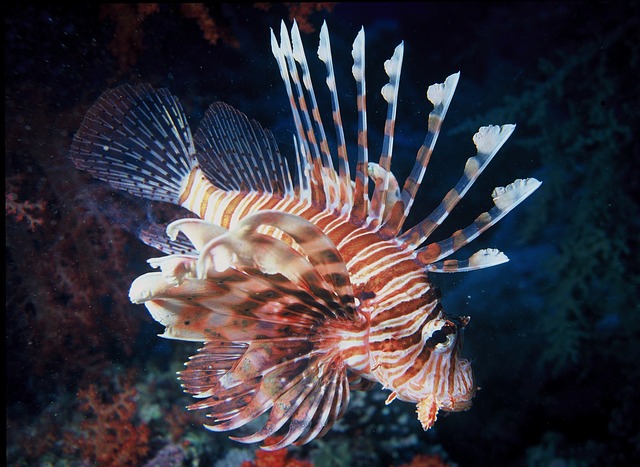 Lionfish have 18 venomous spines total: 2 pelvic spines, 3 anal spines, and 13 dorsal spines.
Pterois is a genus of venomous marine fish, commonly known as lionfish, native to the Indo-Pacific. Also called zebrafish, firefish, turkeyfish, tastyfish or butterfly-cod, it is characterized by conspicuous warning coloration with red, white, creamy, or black bands, showy pectoral fins, and venomous spiky fin rays. Pterois radiata, Pterois volitans, and Pterois miles are the most commonly studied species in the genus. Pterois species are popular aquarium fish. P. volitans and P. miles are a recent and significant invasive species in the west Atlantic, Caribbean Sea and Mediterranean Sea.
Pterois fish in the Atlantic range from 5 to 45 cm (2.0 to 17.7 in) in length, weighing from 0.025 to 1.3 kg (0.055 to 2.866 lb). They are well known for their ornate beauty, venomous spines, and unique tentacles. Juvenile lionfish have a unique tentacle located above their eye sockets that varies in phenotype between species. The evolution of this tentacle is suggested to serve to continually attract new prey; studies also suggest it plays a role in sexual selection.
Wikipedia 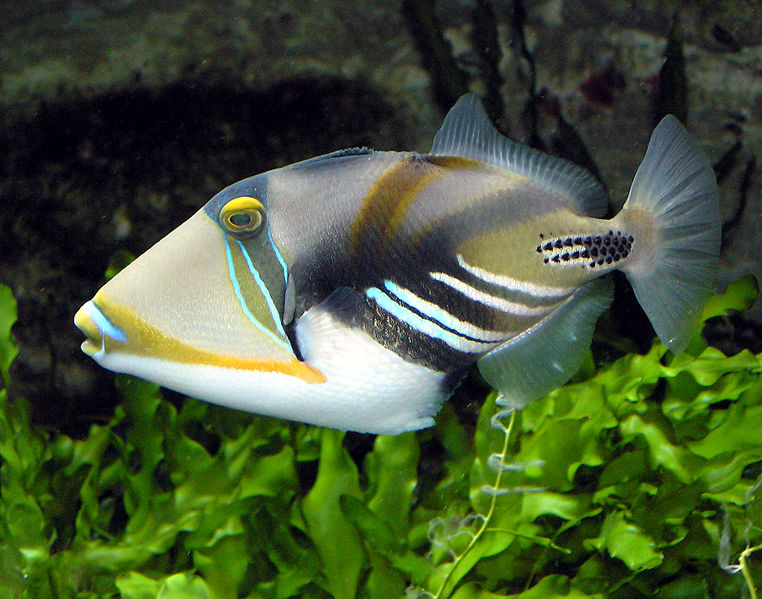 The lagoon triggerfish (Rhinecanthus aculeatus), also known as the blackbar triggerfish, the Picasso triggerfish, the Picassofish, and the Jamal, is a triggerfish, up to 30 cm in length, found on reefs in the Indo-Pacific region.
The Hawaiian name for the fish, humuhumunukunukuāpuaʻa (pronounced [ˈhumuˈhumuˈnukuˈnukuˈwaːpuˈwɐʔə]), also spelled humuhumu-nukunuku-a-puaʻa or just humuhumu for short (meaning "triggerfish with a snout like a pig") shares the same name with the reef triggerfish, the state fish of Hawaii.
This species has been studied in a range of research contexts, from locomotion to colour vision research.
Wikipedia 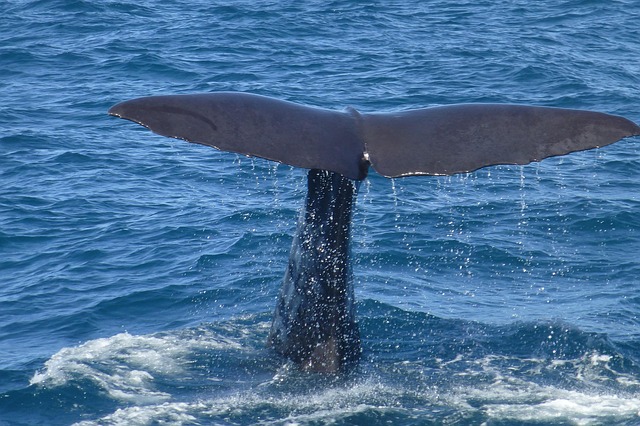 The sperm whale (Physeter macrocephalus) or cachalot /ˈkæʃəˌlɒt, ˈkæʃəˌloʊ/ is the largest of the toothed whales and the largest toothed predator. It is the only living member of genus Physeter and one of three extant species in the sperm whale family, along with the pygmy sperm whale and dwarf sperm whale of the genus Kogia.
The sperm whale is a pelagic mammal with a worldwide range, and will migrate seasonally for feeding and breeding. Females and young males live together in groups, while mature males (bulls) live solitary lives outside of the mating season. The females cooperate to protect and nurse their young. Females give birth every four to twenty years, and care for the calves for more than a decade. A mature sperm whale has few natural predators, although calves and weakened adults are sometimes killed by pods of orcas (killer whales).
Mature males average 16 metres (52 ft) in length but some may reach 20.5 metres (67 ft), with the head representing up to one-third of the animal's length. Plunging to 2,250 metres (7,382 ft), it is the second deepest diving mammal, following only the Cuvier's beaked whale. The sperm whale uses echolocation and vocalization as loud as 230 decibels (re 1 µPa at 1 m) underwater.[6] It has the largest brain on Earth, more than five times heavier than a human's. Sperm whales can live for more than 60 years. Spermaceti (sperm oil), from which the whale derives its name, was a prime target of the whaling industry, and was sought after for use in oil lamps, lubricants, and candles. Ambergris, a solid waxy waste product sometimes present in its digestive system, is still highly valued as a fixative in perfumes, among other uses. Beachcombers look out for ambergris as flotsam. Sperm whaling was a major industry in the nineteenth century, immortalised in the novel Moby Dick. The species is protected by the International Whaling Commission moratorium, and is listed as vulnerable by the International Union for Conservation of Nature.
Wikipedia