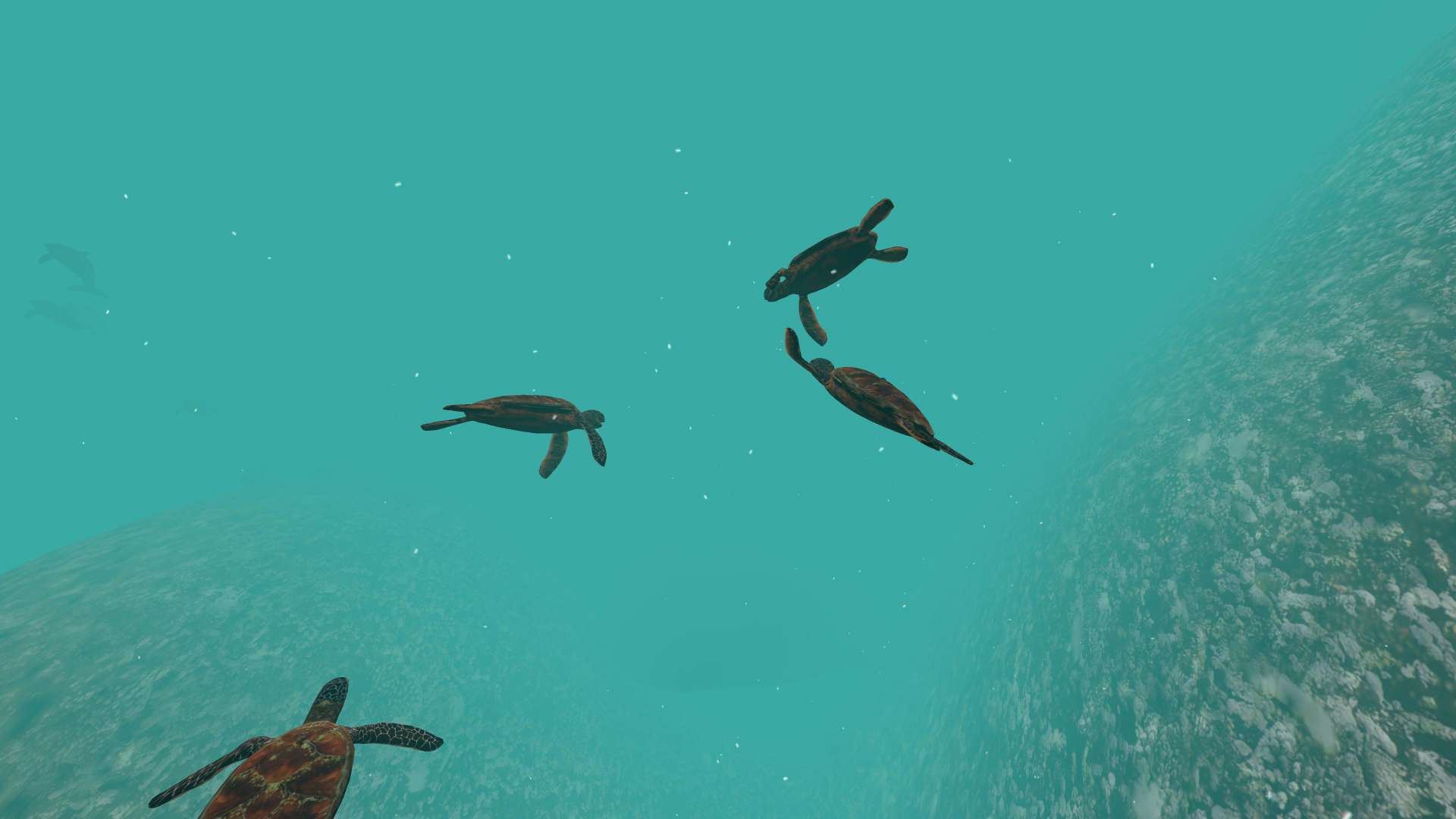 The smallest environment of Sea Life Relax, the reason for its size is the same as its existence. Here, if all the species present could have been incorporated into "Indo-Pacific", it was important to create an environment with a more "green", more tropical water color. In addition some species deserved to be seen more exclusively. You will have no trouble finding almost all animals living in this environment. 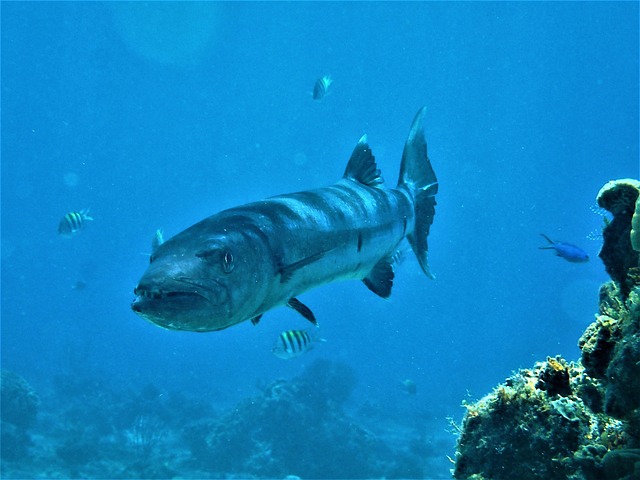 The barracuda is a ray-finned fish known for its large size, fearsome appearance and ferocious behaviour. The barracuda is a saltwater fish of the genus Sphyraena, the only genus in the family Sphyraenidae which was named by Constantine Samuel Rafinesque in 1815. It is found in tropical and subtropical oceans worldwide ranging from the eastern border of the Atlantic Ocean to the Red Sea, on its western border the Caribbean Sea, and in tropical areas of the Pacific Ocean. Barracudas reside near the top of the water and near coral reefs and sea grasses. Wikipedia 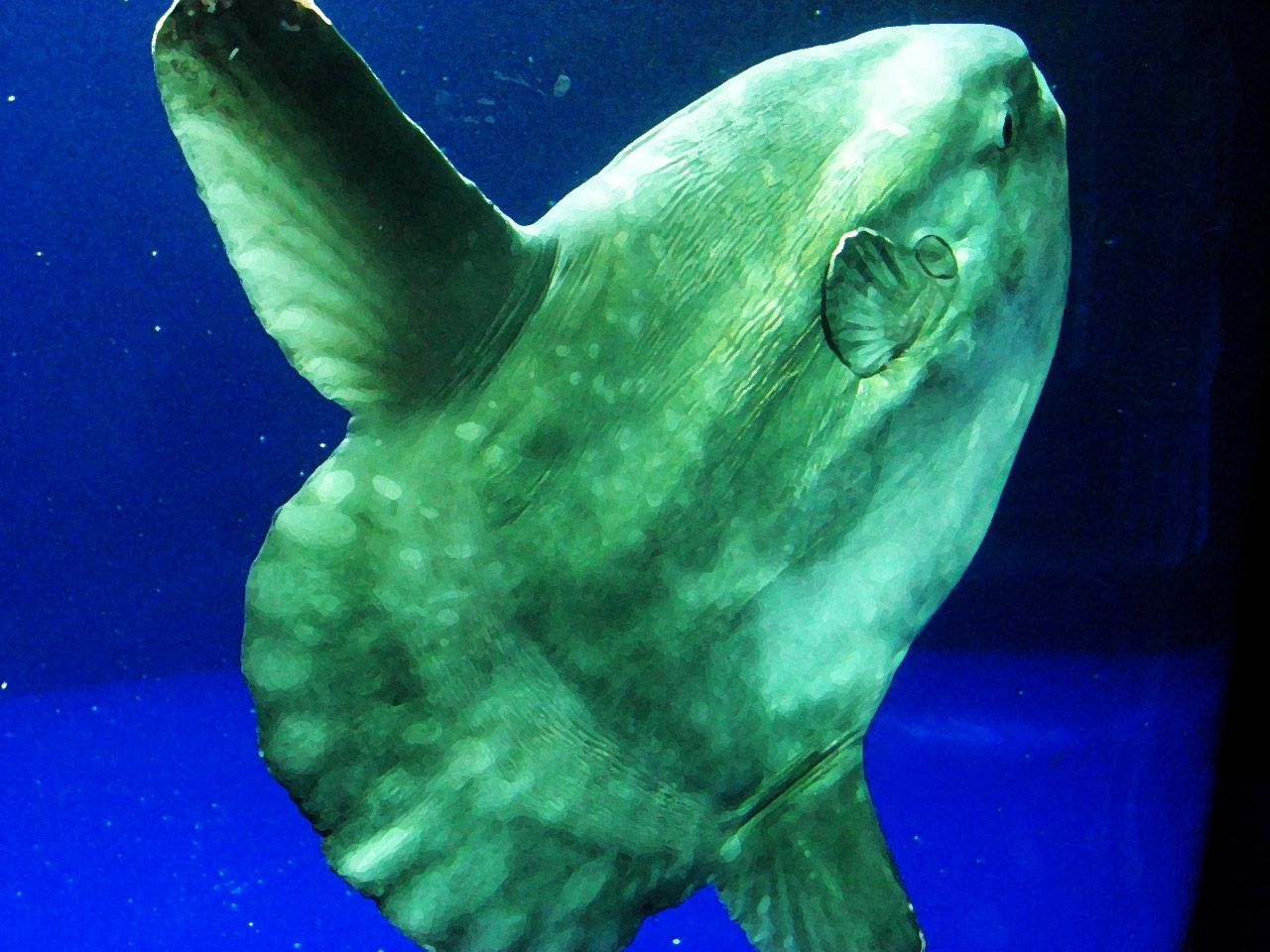 The ocean sunfish or common mola (Mola mola) is the heaviest known bony fish in the world. Adults typically weigh between 247 and 1,000 kg (545–2,205 lb). The species is native to tropical and temperate waters around the globe. It resembles a fish head with a tail, and its main body is flattened laterally. Sunfish can be as tall as they are long when their dorsal and ventral fins are extended.
Sunfish live on a diet consisting mainly of sea jellies, but because this diet is nutritionally poor, they consume large amounts to develop and maintain their great bulk. Females of the species can produce more eggs than any other known vertebrate, up to 300,000,000 at a time. Sunfish fry resemble miniature pufferfish, with large pectoral fins, a tail fin, and body spines uncharacteristic of adult sunfish.
Adult sunfish are vulnerable to few natural predators, but sea lions, killer whales, and sharks will consume them. Among humans, sunfish are considered a delicacy in some parts of the world, including Japan, Korea, and Taiwan. In the EU, regulations ban the sale of fish and fishery products derived from the family Molidae. Sunfish are frequently caught in gillnets.
A member of the order Tetraodontiformes, which also includes pufferfish, porcupinefish, and filefish, the sunfish shares many traits common to members of this order. The ocean sunfish, Mola mola, is the type species of the genus. Wikipedia 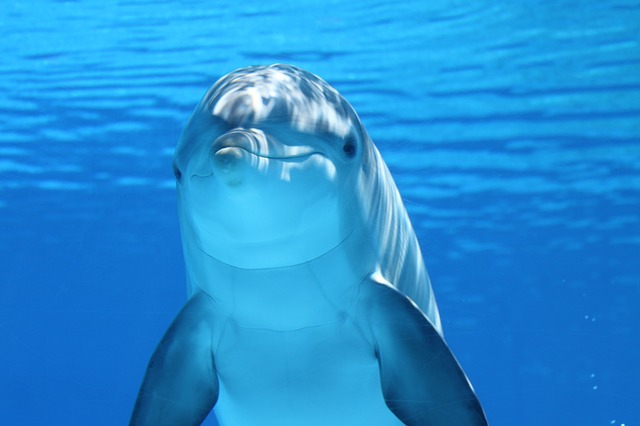 Oceanic dolphins or Delphinidae are a widely distributed family of dolphins that live in the sea. Thirty extant species are described. They include several big species whose common names contain "whale" rather than "dolphin", such as the killer whale and the pilot whales. Delphinidae is a family within the superfamily Delphinoidea, which also includes the porpoises (Phocoenidae) and the Monodontidae (beluga whale and narwhal). River dolphins are relatives of the Delphinoidea.
Oceanic dolphins range in size from the 5.6-foot (1.7 m)-long and 110-pound (50 kg) Maui's dolphin to the 31-foot (9.4 m) and 11-short-ton (10.0 t) killer whale, the largest known dolphin. Several species exhibit sexual dimorphism; the males are larger than females. They have streamlined bodies and two limbs that are modified into flippers. Though not quite as flexible as seals, some dolphins can travel at 34.5 mph (55.5 km/h). Most delphinids primarily eat fish, along with a smaller number of squid and small crustaceans, but some species specialise in eating squid, or, in the case of the killer whale, also eat marine mammals and birds. All, however, are purely carnivorous. They typically have between 100 and 200 teeth, although a few species have considerably fewer. Delphinids travel in large pods, which may number a thousand individuals in some species. Each pod forages over a range of a few dozen to a few hundred square miles. Some pods have a loose social structure, with individuals frequently joining or leaving, but others seem to be more permanent, perhaps dominated by a male and a harem of females.
Individuals communicate by sound, producing low-frequency whistles, and also produce high-frequency broadband clicks of 80–220 kHz, which are primarily used for echolocation. Gestation lasts from 10 to 18 months, and results in the birth of a single calf. Some species are well adapted for diving to great depths. They have a layer of fat, or blubber, under the skin to keep warm in the cold water.
Although oceanic dolphins are widespread, most species prefer the warmer waters of the tropic zones, but some, like the right whale dolphin, prefer colder climates. Some have a global distribution, like the killer whale. Oceanic dolphins feed largely on fish and squid, but a few, like the killer whale, feed on large mammals, like seals. Male dolphins typically mate with multiple females every year, but females only mate every two to three years. Calves are typically born in the spring and summer, and females bear all the responsibility for raising them. Mothers of some species fast and nurse their young for relatively long times. Dolphins produce a variety of vocalizations, usually in the form of clicks and whistles.
Oceanic dolphins are sometimes hunted in places such as Japan, in an activity known as dolphin drive hunting. Besides drive hunting, they also face threats from bycatch, habitat loss, and marine pollution. Dolphins have been depicted in various cultures worldwide. They occasionally feature in literature and film, as in the Warner Bros film Free Willy. Dolphins are sometimes kept in captivity and trained to perform in shows. The most common species of dolphin in captivity is the bottlenose dolphin, and less than 50 killer whales were found in oceanariums in 2012. Wikipedia 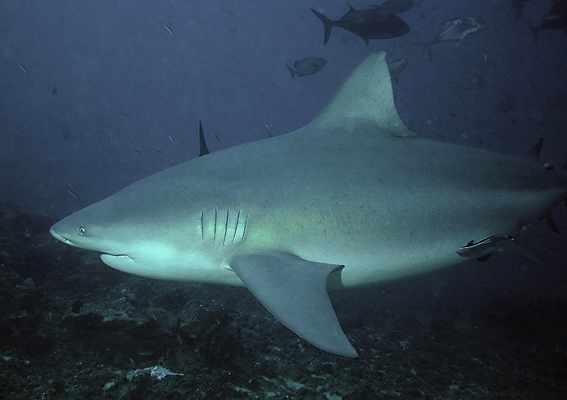 The bull shark (Carcharhinus leucas), also known as the Zambezi shark (informally "zambi") in Africa, and Lake Nicaragua shark in Nicaragua, is a requiem shark commonly found worldwide in warm, shallow waters along coasts and in rivers. The bull shark is known for its aggressive nature, and presence in warm, shallow brackish and freshwater systems including estuaries and rivers.
Bull sharks can thrive in both salt and fresh water and can travel far up rivers. They have been known to travel up the Mississippi River as far as Alton, Illinois, about 700 miles (1100 km) from the ocean. However, few freshwater human-shark interactions have been recorded. Larger-sized bull sharks are probably responsible for the majority of near-shore shark attacks, including many bites attributed to other species.
Unlike the river sharks of the genus Glyphis, bull sharks are not true freshwater sharks, despite their ability to survive in freshwater habitats. Wikipedia 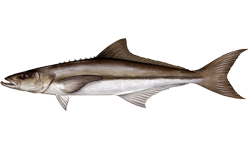 Attaining a maximum length of 2 m (78 in) and maximum weight of 78 kg (172 lb), the cobia has an elongated fusiform (spindle-shaped) body and a broad, flattened head. The eyes are small and the lower jaw projects slightly past the upper. Fibrous villiform teeth line the jaws, the tongue, and the roof of the mouth. The body of the fish is smooth with small scales. It is dark brown in color, grading to white on the belly with two darker brown horizontal bands on the flanks. The stripes are more prominent during spawning, when they darken and the background color lightens.
The large pectoral fins are normally carried horizontally, perhaps helping the fish attain the profile of a shark. The first dorsal fin has six to nine independent, short, stout, sharp spines. The family name Rachycentridae, from the Greek words rhachis ("spine") and kentron ("sting"), was inspired by these dorsal spines. The mature cobia has a forked, slightly lunated tail, which is usually dark brown. The fish lacks a swim bladder. The juvenile cobia is patterned with conspicuous bands of black and white and has a rounded tail. The largest cobia taken on rod and reel came from Shark Bay, Australia, and weighed 60 kg (135 lb). Wikipedia 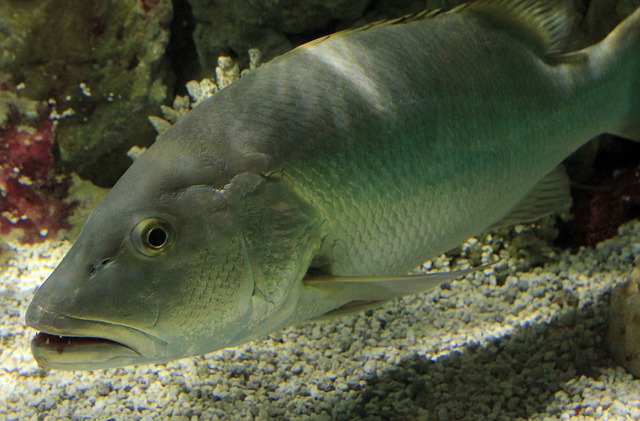 The cubera snapper (Lutjanus cyanopterus) is a species of snapper native to the western Atlantic Ocean from Nova Scotia to the Amazon River in Brazil, though it is rare north of Florida. It can also be found in the Caribbean Sea and, rarely, in the Gulf of Mexico. It inhabits areas associated with reefs, preferring areas with rocky substrates, and feeds on ray-finned fishes, shrimp and crabs. It can be found at depths from 18 to 55 m (59 to 180 ft). This species can reach a length of 160 cm (63 in), though most do not exceed 90 cm (35 in). The greatest recorded weight for a specimen of this species is 57 kg (126 lb). It is commercially important and is also sought-after as a game fish, though it has been reported to cause ciguatera poisoning. Wikipedia 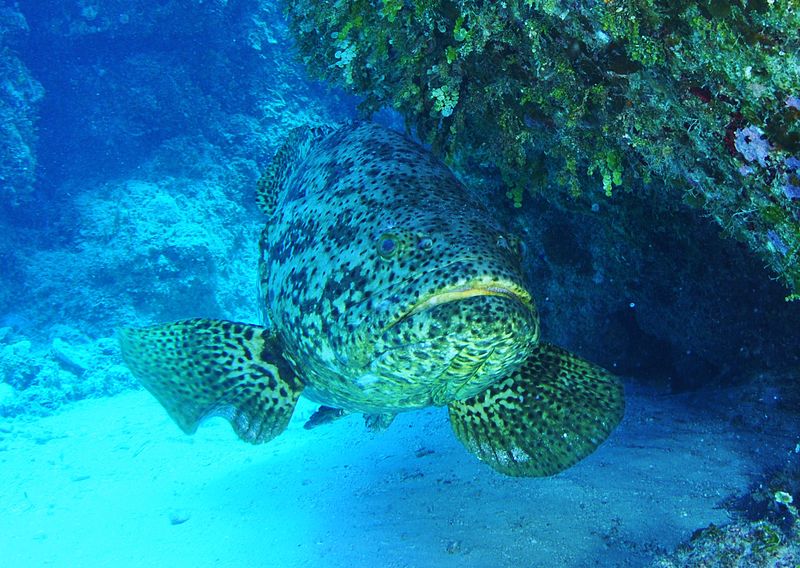 The Atlantic goliath grouper or itajara (Epinephelus itajara), also known as "jewfish", is a large saltwater fish of the grouper family found primarily in shallow tropical waters among coral and artificial reefs at depths from 5 to 50 m (16 to 164 ft). Its range includes the Florida Keys in the US, the Bahamas, most of the Caribbean and most of the Brazilian coast. On some occasions, it is caught off the coasts of the US states of New England off Maine and Massachusetts. In the eastern Atlantic Ocean, it occurs from the Congo to Senegal. Wikipedia 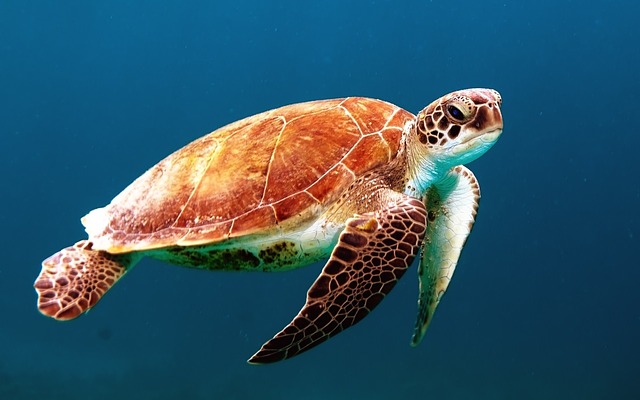 The green sea turtle (Chelonia mydas), also known as the green turtle, black (sea) turtle or Pacific green turtle, is a large sea turtle of the family Cheloniidae. It is the only species in the genus Chelonia. Its range extends throughout tropical and subtropical seas around the world, with two distinct populations in the Atlantic and Pacific Oceans, but it is also found in the Indian Ocean. The common name comes from the usually green fat found beneath its carapace; these turtles' shells are olive to black.
This sea turtle's dorsoventrally flattened body is covered by a large, teardrop-shaped carapace; it has a pair of large, paddle-like flippers. It is usually lightly colored, although in the eastern Pacific populations parts of the carapace can be almost black. Unlike other members of its family, such as the hawksbill sea turtle, C. mydas is mostly herbivorous. The adults usually inhabit shallow lagoons, feeding mostly on various species of seagrasses. The turtles bite off the tips of the blades of seagrass, which keeps the grass healthy. Like other sea turtles, green sea turtles migrate long distances between feeding grounds and hatching beaches. Many islands worldwide are known as Turtle Island due to green sea turtles nesting on their beaches. Females crawl out on beaches, dig nests and lay eggs during the night. Later, hatchlings emerge and scramble into the water. Those that reach maturity may live to 80 years in the wild.
C. mydas is listed as endangered by the IUCN and CITES and is protected from exploitation in most countries. It is illegal to collect, harm or kill them. In addition, many countries have laws and ordinances to protect nesting areas. However, turtles are still in danger due to human activity. In some countries, turtles and their eggs are hunted for food. Pollution indirectly harms turtles at both population and individual scales, as well as light pollution. Many turtles die after being caught in fishing nets. Also, real estate development often causes habitat loss by eliminating nesting beaches. Wikipedia 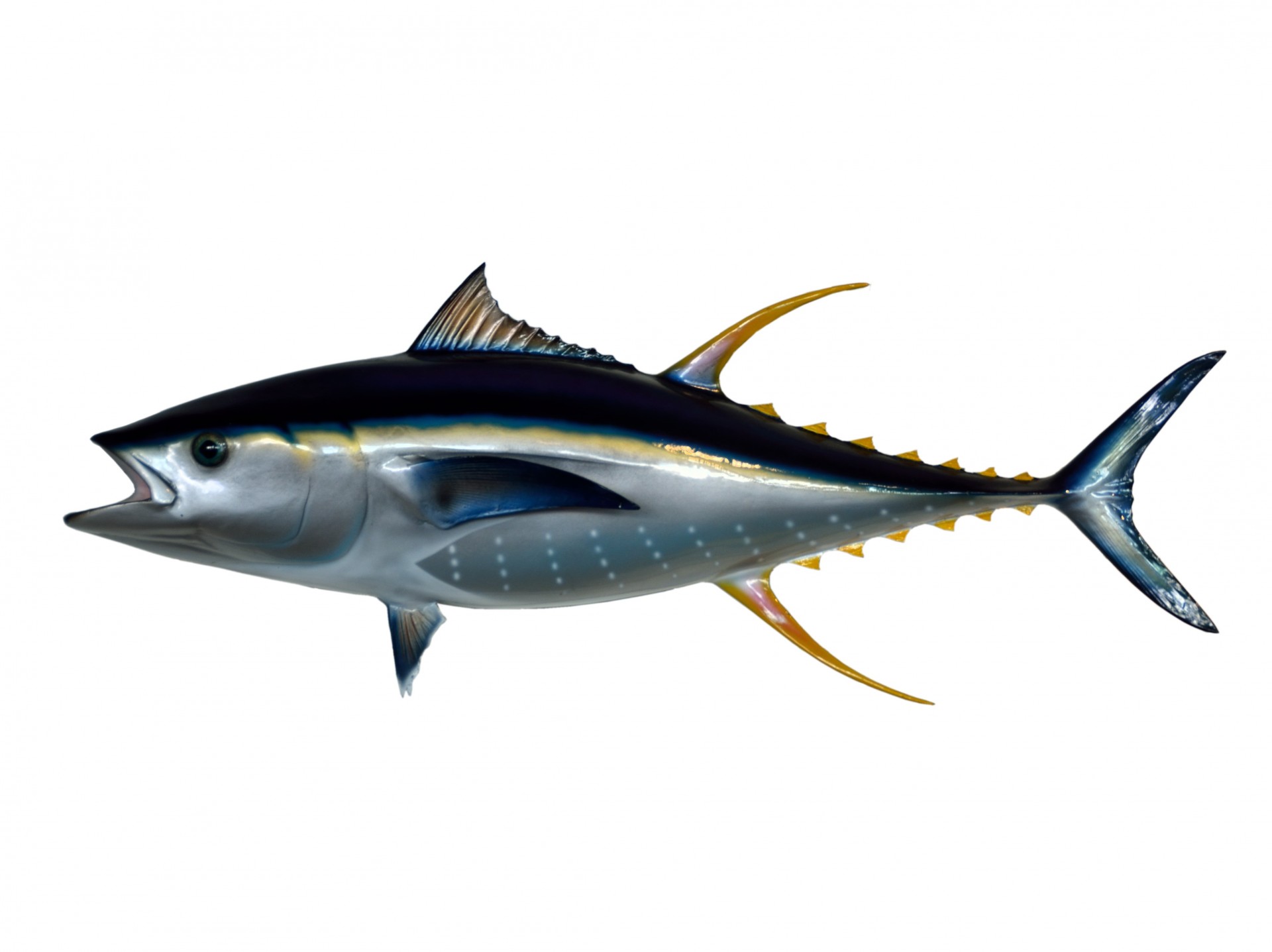 The yellowfin tuna (Thunnus albacares) is a species of tuna found in pelagic waters of tropical and subtropical oceans worldwide. Yellowfin is often marketed as ahi, from the Hawaiian ʻahi, a name also used there for the closely related bigeye tuna. The species name, albacares ("white meat") can also lead to confusion: in English, the albacore tuna (Thunnus alalunga) is a different species, while yellowfin is officially designated albacore in French and referred to as albacora by Portuguese fishermen. Wikipedia